K.J. Holmes is an independent dance artist, singer, poet, and actor based in Brooklyn, New York.  Her training began as a child with ballet and musical theater as well as judo and fencing. This blend of approaches is a basis for her consistent expression and art making.  Her dance studies at the New School for Social Research and with Andre Bernard (1979 -81) led her to improvisation and new dance techniques that were being explored at that time.  K.J. has helped to define, first as a student and now as a teacher and performer, many contemporary improvisational and somatic practices, collaborating with forerunners Simone Forti, Lisa Nelson and Image Lab, and Steve Paxton.  She continues to push into new frontiers of dance and theater with her love of research and experience.   Her dance/theater pieces have been presented in NYC at the Chocolate Factory Theater,  Danspace Project, The Kitchen, P.S. 122, Movement Research at the Judson Church, D.T.W., Dixon Place, University Settlement, Warren Street Performance Loft, The Present Company, The Thalia Theater at Symphony Space, the Joyce Soho and the Vision Jazz Festival, as well as nationally and internationally.

K.J. is a graduate of the 2 year Sanford Meisner acting training at the Esper Studio NYC studying with master teacher Terry Knickerbocker (2009), Satya Yoga, studying with yogi Sondra Loring (2007), and The School for Body-Mind Centering with Bonnie Bainbridge Cohen (1999), of which the play between is essential to her current practices.   As a sought after teacher of contact/improvisations and somatic approaches to dance, theater and voice,  Holmes is adjunct faculty at NYU/ Experimental Theatre Wing since 2001, the Juilliard School since 2015, has been teaching through Movement Research since 1986 and has been a guest teaching performing artist recently at Sarah Lawrence University, Bennington, Yale, Princeton and Roger Williams University.   K.J. completed an Ayurvedic certification training in 2017 under the mentorship of Dr. Naina Marballi. She has a private practice in Dynamic Alignment and Re-integration offering movement tutoring and coaching, and yoga/ayurvedic sessions.

K.J. travels throughout the world teaching and performing at universities, festivals and venues that range from theaters to site specific locations to living rooms. Her commitment to the collaboration between dance and music continues to inform her work, performing alongside many brilliant musicians, vocalists and poets such as trumpeters Dave Douglas and Roy Campbell, Jr.,  singer Lisa Sokolov, actor Keith Biesack, dancers Karen Nelson, Karinne Keithley Seyers and Jon Kinzel, and poet Julie Carr, and in the work of artists including Ann Bogart, Ann Carlson, Allyson Green, Meg Stuart, Randy Warshaw and Cathy Weis.

K.J. has most recently danced with Miguel Gutierrez and the Powerful People, in The Works of Steve Paxton at Dia:Beacon and in Xavier Le Roy’s Retrospective at PS1:MoMA, and is currently performing with Karinne Keithley Syers and Lance Gries.   She was a founding member of  the Veterans Project under the direction of  Fay Simpson, and was a 2012-14 Movement Research Artist in Residence where she began developing her new dance theater piece HIC SVNT DRACONES (HSD).  HSD will be presented as a full evening length piece in 2019.   K.J. has had the great pleasure of performing in the recent work of Emily Johnson CATALYST (NYLA 2015); Mark Dendy (Ritual Cyclical, Lincoln Center Out of Doors 2013), Lance Gries (The 50’s Project video; Immanent Field, Danspace Project, 2014;), Melinda Ring (The Landscape, The Kitchen Gallery, 2014), and Donna Uchizono (Short Tahitian Temper, NYLA 2013). In 2017, K.J. was cast in artist/filmmaker Matthew Barney’s new film Redoubt, videos The Quest for Joy by Cristiane Bouger and The Casting Call Project by Jenna Cirali Galli, and Fashion Week in Rachel Comey’s design.

K.J. was the co-curator of the MR Fall Festival -Devotion/Rigor/Sustainability (2011), the Improvisation is Hard Festival (2004), the Studies Project (1983-85),  Measuring K – 3 evenings of solos and duets plus 24 hour marathon improvisation  (Culture Project, 2004).  K.J. was a panelist in Studies Project:Overlapping Circles (Improvisation, Contact Improvisation, Performance, Practice, Human Collaboration through Movement Research and the New Museum (2013) and in Conversation without Walls- Choreography under the Influence at Danspace Project (2011).  She has read/performed her poetry at The Stone, Dixon Place and the Knitting Factory and has been published in Contact Quarterly, Movement Research Performance Journal, Dance Spirit, Dance Magazine, on line in I, Theatrics, and co-curated an evening of Dance and Poetry at Harvard University. 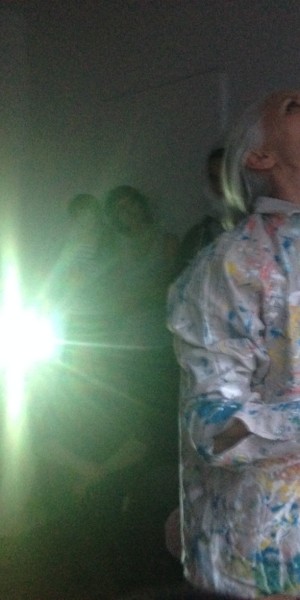